Suggested reading order for the Sam Jameson series and spinoffs:

Lars set out to write novels that could be read in any order. But that's not how things worked out.

As the Sam Jameson series has evolved and matured, there have been some stunning developments in the story line.

That means there are some serious spoilers to watch out for.

Please be sure to read the books in the recommended order to have the best experience!

Book One
The Incident: INFERNO RISING

This is Part Two of the story that started it all, THE INCIDENT.

Six corpses and a bomb. It's been one hell of a week.

When the good guys have you in their crosshairs, where can you turn for help?

Special Agent Sam Jameson doesn’t pay much attention to the crackpots and goofballs, with their shrill economic doomsday predictions… until she realizes their dire conjectures turned out to be spot-on.

Will an unrepentant computer hacker's brazen heist and a thin trail of cryptic clues hold the key to Sam’s survival? W

“This book was absolutely mind-blowing. I LOVED IT!”

Elite hacker and amateur thief Sabot Mondragon has bumbled into the clutches of his former employers. Maybe he shouldn't have stolen billions in crypto-currency, though the outrageous heist made him one of the richest men on the planet.

Sabot has no clue that the fate of the global economy is intertwined with his own.

But he knows his odds aren't good.

Brash, ballsy, and beautiful Special Agent Sam Jameson is hot on his trail, racing headlong into a buzz saw of intrigue and bad blood left over from the Cold War.

Will Sabot survive his vicious kidnappers? Can Sam stop the world's most secretive organization from pulling off a global coup?

Everything depends on Sam surviving a ruthless and brutal Mindscrew.

From the jungles of Central America to Moscow, MINDSCREW’s explosive action, razor sharp plot, and smart, sexy characters will keep you turning pages well into the night.

You've done nothing wrong. So why have they thrown you in prison? No phone call. No lawyer. Just these words: "National Security."

Is it a massive mistake?   Or is it something much, much worse?

Sam finds herself at the mercy of a ruthless and relentless conspiracy that strikes at the heart of the American way of life. They have every advantage: Surveillance everywhere. The world's most powerful police force. International reinforcements. Limitless resources.

Can she beat the odds, save herself, and dismantle an existential threat to liberty and freedom?

Lars Emmerich’s writing is "sharp, edgy, a little dystopian, and exquisitely researched." FALLOUT’s gripping, twisting plot is terrifying — precisely because it is so very real.

"This is the best writing in decades."

"Lars Emmerich is right up there with Patterson, Baldacci, Forsyth, and DeMille."

"Some of the best thriller fiction you will ever read."

"Another edge-of-your-seat masterpiece from Lars Emmerich."

"One of my favorite action novels of all time."

A little girl has been slain. Is it Special Agent Sam Jameson’s fault?

Homeland, Justice, and a powerful US Senator think so.

She’s been suspended, and she even faces an indictment. With her beau stuck on an overseas deployment, she’s left alone with her guilt and heartache — until a cryptic and terrifying message propels her out of her darkness and into a morass of international intrigue.

Along the way, the clues start to add up, and Sam begins to wonder: was the little girl’s tragic death an accident, or something much worse? And what does the CIA have to do with the horrible tragedy?

Halfway across the globe, Sam runs into someone from her past. But something’s different about him, and it quickly becomes clear he’s in a desperate struggle of his own. Three important people in his life have been kidnapped and face a brutal death — that he himself has set in motion.

Are all of their fates intertwined? Are Sam and the man from her past fighting the same battle, against the same adversary? Can they unravel a vast and deadly conspiracy in time to save their own lives?

***SPOILER WARNING: Do not read further until you have read BLOWBACK!

A mysterious note. A shadowy figure from Sam Jameson’s past. They invade Sam’s self-imposed exile to deliver shocking news: Alexander Wells, the man who murdered a five-year-old girl and framed Sam to take the fall, didn’t die in the fiery blast that almost claimed her life.

And he’s recruited a team of hardened criminal operatives with just one target in their sights: Sam Jameson.

Sam soon finds herself at the mercy of forces with unthinkable reach and resources. With rogue government elements, a brutal organized crime family, and the world’s most powerful clandestine cabal all lined up against her, Sam must escape a terrifying fate at the hands of a madman to make the most difficult choice of her life.

And along the way, Sam must reconcile her growing feelings for an old friend with her heartbreak over the loss of Brock James, the man she planned to spend her life with.

***SPOILER WARNING: Do not read any further until you have read BURN!

It's been two short weeks since Sam Jameson's harrowing experience in the mountain cabin, and former Homeland agent Sam Jameson is still a long way from okay.

She's spent the time driving aimlessly, alone and anonymous, trying to make sense of her ordeal.

Those unimaginable words -- "Yes, Madam Facilitator" -- echo in her memory for the thousandth time as she happens upon a beautiful, traumatized, and nearly naked young woman fleeing for her life in the midnight cold.

Hours later, Sam finds herself in the Philadelphia police commissioner's office with his blood on her hands.

A heinous crime is in the making; two dozen lives hang in the balance.

And hidden in the background, a daring conspiracy threatens all that Sam holds dear. 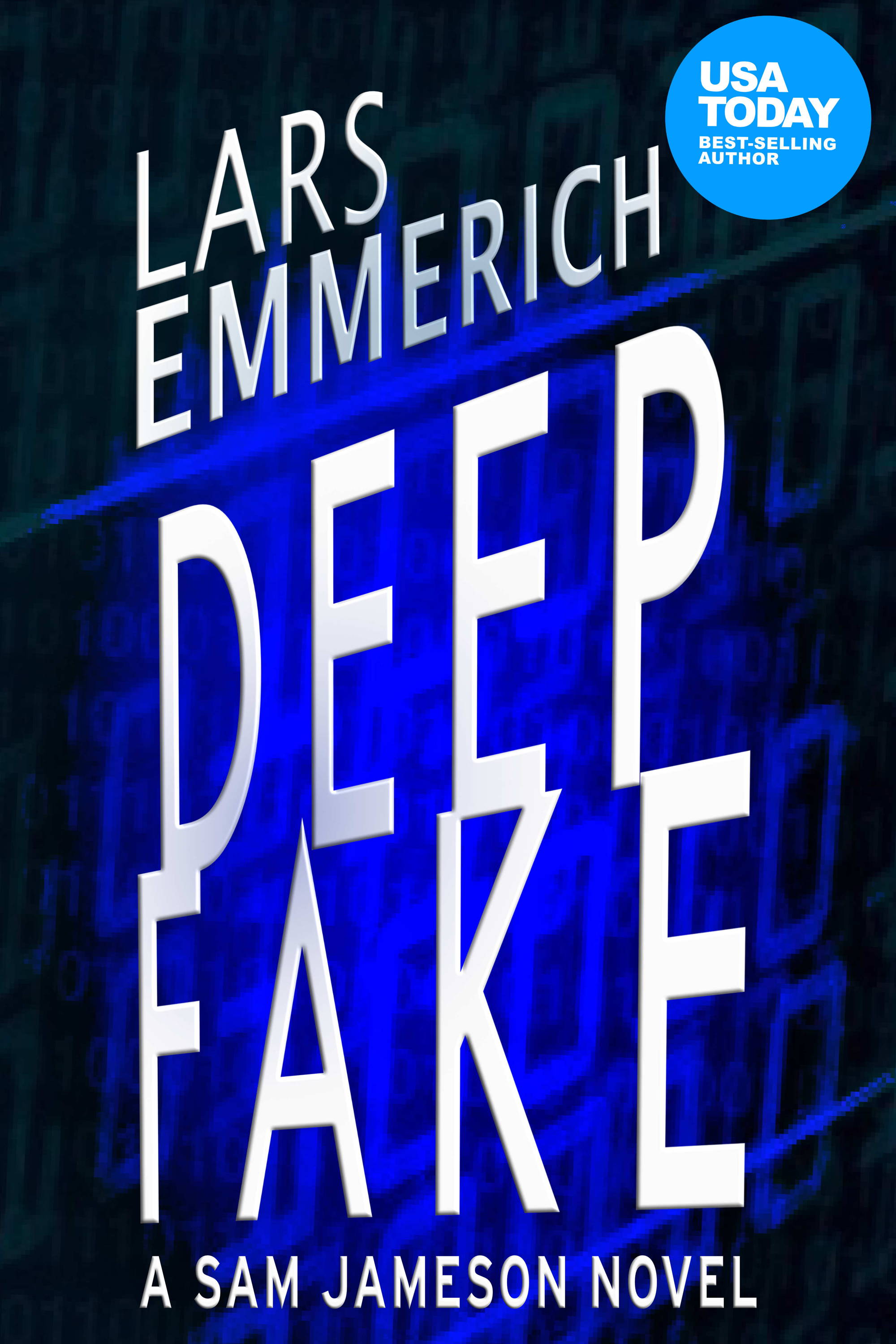 ***SPOILER WARNING: Do not read any further until you have read The WRONG!

Scheduled for release in Fall 2020

What will Sam Jameson do with Capstone?

What happened to Brock James? Will they ever reconcile?

Pre-order DEEP FAKE and be among the first to find out!

"Witty, acerbic, and off-kilter. Pretty much the perfect read!”

But not a very good one. He’s instantly in over his head.

So he runs, trying to escape the life.

But can you ever outrun yourself? Or are your unconquered demons always at your heels?

DESCENT is a noir psychological thriller from #1 Bestselling Author and conspiracy master Lars Emmerich, played out against a backdrop of deep international intrigue, corporate greed, and a morally bankrupt state security apparatus.

A Quinn novel that occurs prior to The INCIDENT

”This might be the best thriller I've ever read!”

Quinn does bad things to bad people, but he does them for good reasons. It's a common refrain in the national security game.

But Quinn is anything but common.

He has chased and caught rogue spies, brought vengeance to those who deserved it, survived incredible odds, and thrived in one of the world's deadliest jobs.

Yet nothing has prepared him for Cathrijne.

She is otherworldly, ethereal, beautiful, brilliant...

And now Catherijne is missing, an apparent casualty of an operation gone bad.

That same failed operation has left Quinn in the crosshairs of some of the world's most ruthless players -- Russians for sure, Islamists as a matter of course, maybe also Mossad... and most disconcerting of all, his own clandestine service seems hellbent on his demise.

And yet, though he's under attack from all quarters, Quinn is concerned with only one thing: saving Catherijne.

Will he piece together the cryptic clues in time to save her from an unspeakable end?

Does he have the strength and skill to avoid the same end himself?

MONARCH is the first Quinn novel from USA Today Bestselling Author Lars Emmerich, and is part of the Sam Jameson universe that has thrilled over 1,000,000 readers in seventeen countries.